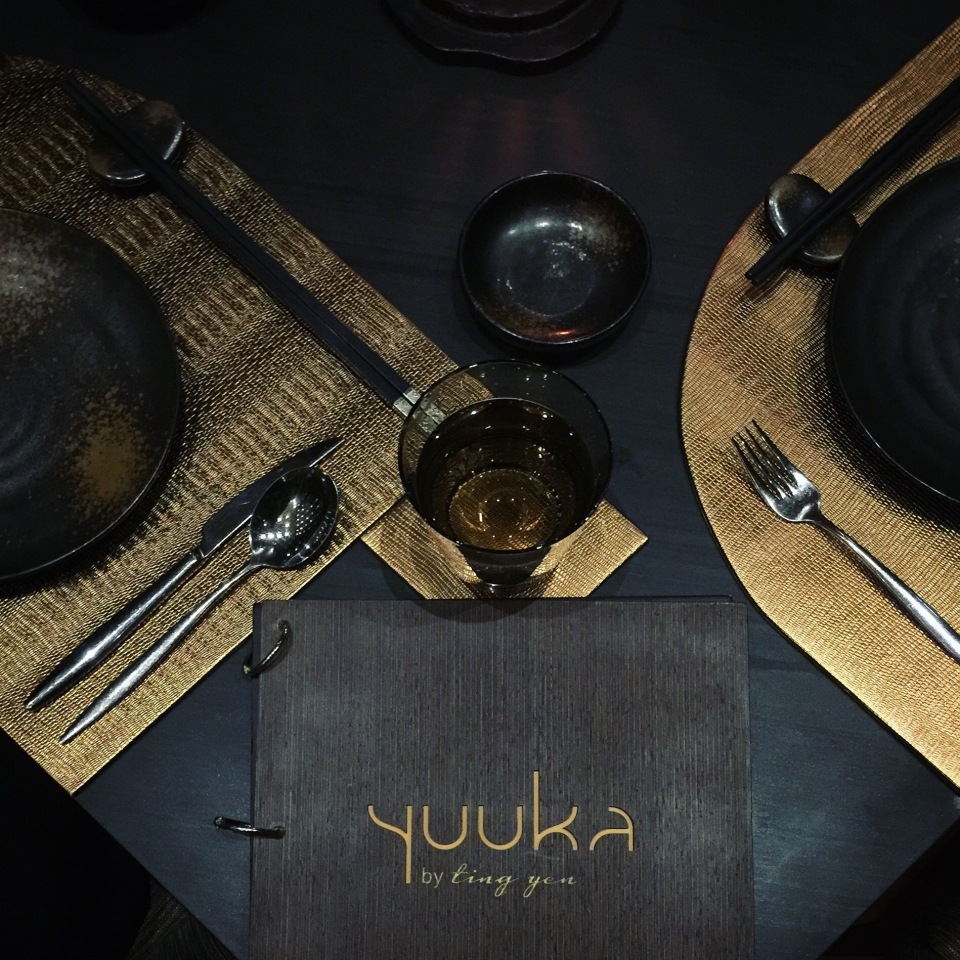 Dining at Yuuka with a meal prepared by none other than Chef Ting Yen was a dream come true. We had heard so about him and his son Kevin’s feat at St. Regis Mumbai’s Japanese restaurant and were delighted to be invited to review their new menu. 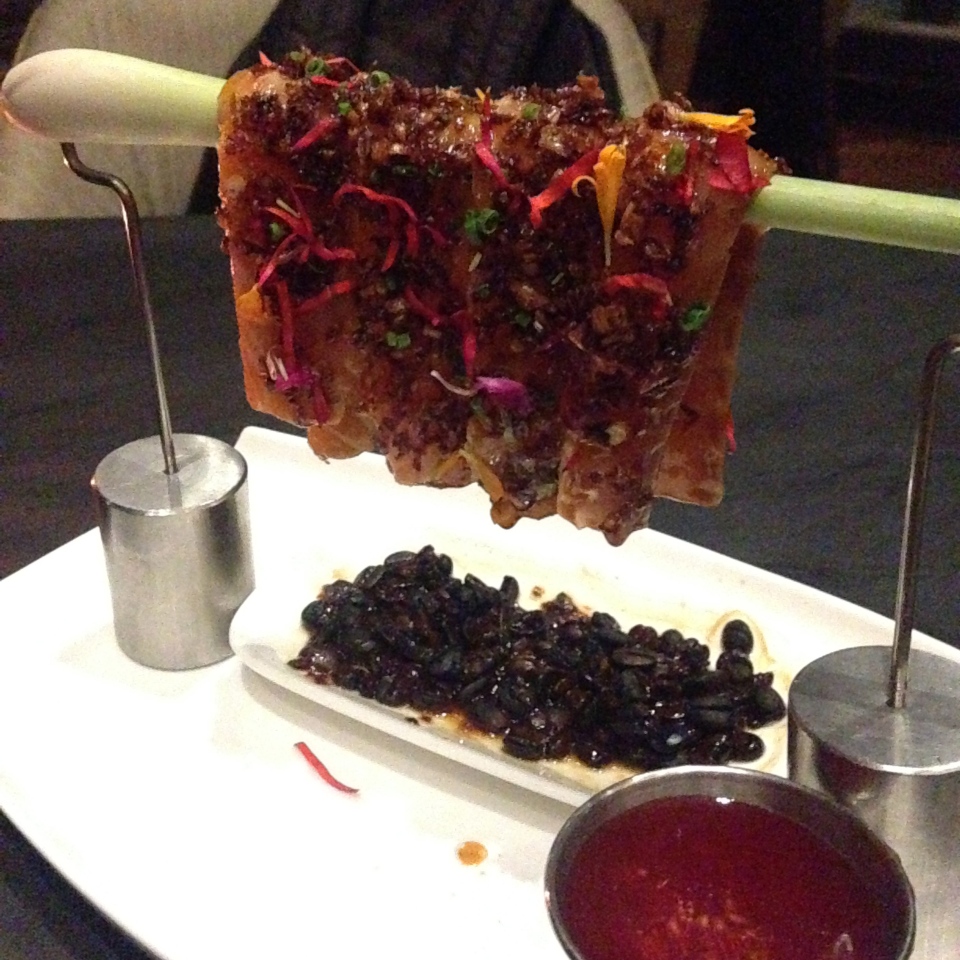 We started our meal with one of Yuuka’s signature dishes – Salmon on Fire! Strips of raw salmon are placed on a lemongrass stalk that is suspended on a bed of coffee beans. The salmon is encrusted with bits of deep fried onion pieces and petals of edible flowers. Once brought to the table, the server sets fire to the coffee beans, lightly scorching the meat rendering a smoky char that adds immense flavour. It was served with a dipping sauce, but the salmon itself was so delicious; you don’t really need the sauce to enjoy the dish. Our meal was off to a great start. 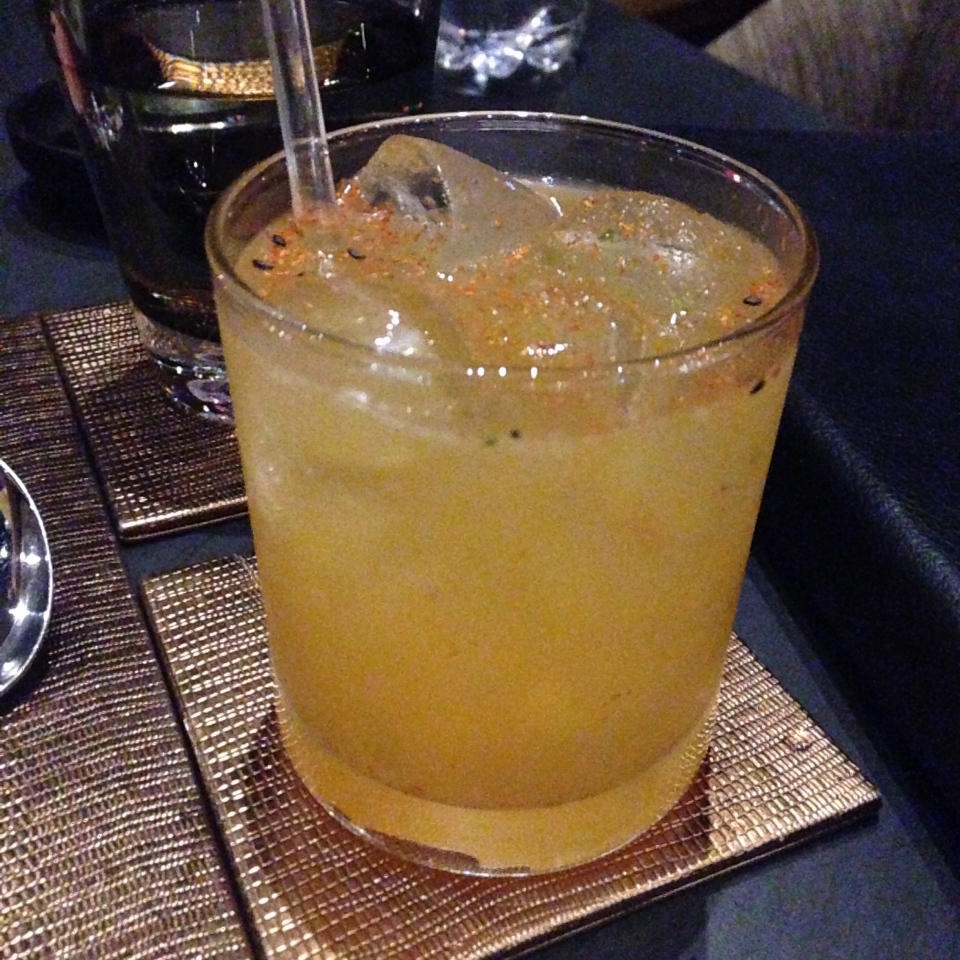 For drinks we had the Yuuka’s signature cocktails – Ginger Manhattan (Jim Beam, Martini Rosso, Ginger Falemum and Sour Mix) which was a very asian version of the classic cocktail and Ting’s Sushi Companion (Cucumber infused Sake, Mint, Cucumber Lime), a refreshing cocktail that really added to the dining experience. Later we also tried the Samurai – Yamazaki (12YO) Whisky Orange Juice and Togarashi powder. The whisky is Suntory’s (Japan’s first commercial distillery) flagship single malt whisky, multi-layered with fruit and Mizunara aromas, combined with Orange and Togarashi it gave a lovely fruity punch with some heat. All three are a must try!

The next appetizer was the Avocado Tartare; a dish with a million textures (or at least that’s what it felt like). It is served cold in a frozen martini glass. The avocado tartare is placed on Perilla leaves or Shiso and served on ice. A layer of ice separates that from the Corn Dashi. The server breaks the ice to mix both leaving us with a chilled glass of creamy deliciousness. We loved the way the dish looked and the having it cold made it really enjoyable.

Chef Ting Yen is known for his restaurant Oishii in Boston. Being born in Japan, and raised in Korea and Taiwan, Chef Yen uses the experience and passion he has for Japanese food to craft a truly impressive menu at Yuuka. Using influences from his childhood and elements from family recipes, he carefully crafts each dish with refinement and a myriad of flavours and presents it in a modern way. His son Kevin who is equally passionate, adds to the symphony.

The next dish was presented to us by the duo. Chef Yen brought to our table a hot infusion siphon. The first time we’d seen one brought out onto a restaurant floor. It’s an amazing tool to make hot broths or cocktails, even tea and coffee at the table. Chef Yen called it the ‘5 min Mushroom Dashi’. Made with Kombu, dried Bonito flakes and a variety of mushrooms, the dashi is most certainly a flavour bomb of umami. We were served chunks of prawns, oyster and shiitake mushroom with scallions, and medallions of semolina cakes that were seared for a light caramelized exterior. The semolina cakes were sweet and give a contrast to the rich umami flavour in the dish. Elegant and delicious.

We also tried the Chilean Sea Bass that was packed with deep soy flavour which was followed by a train of Maki Rolls. 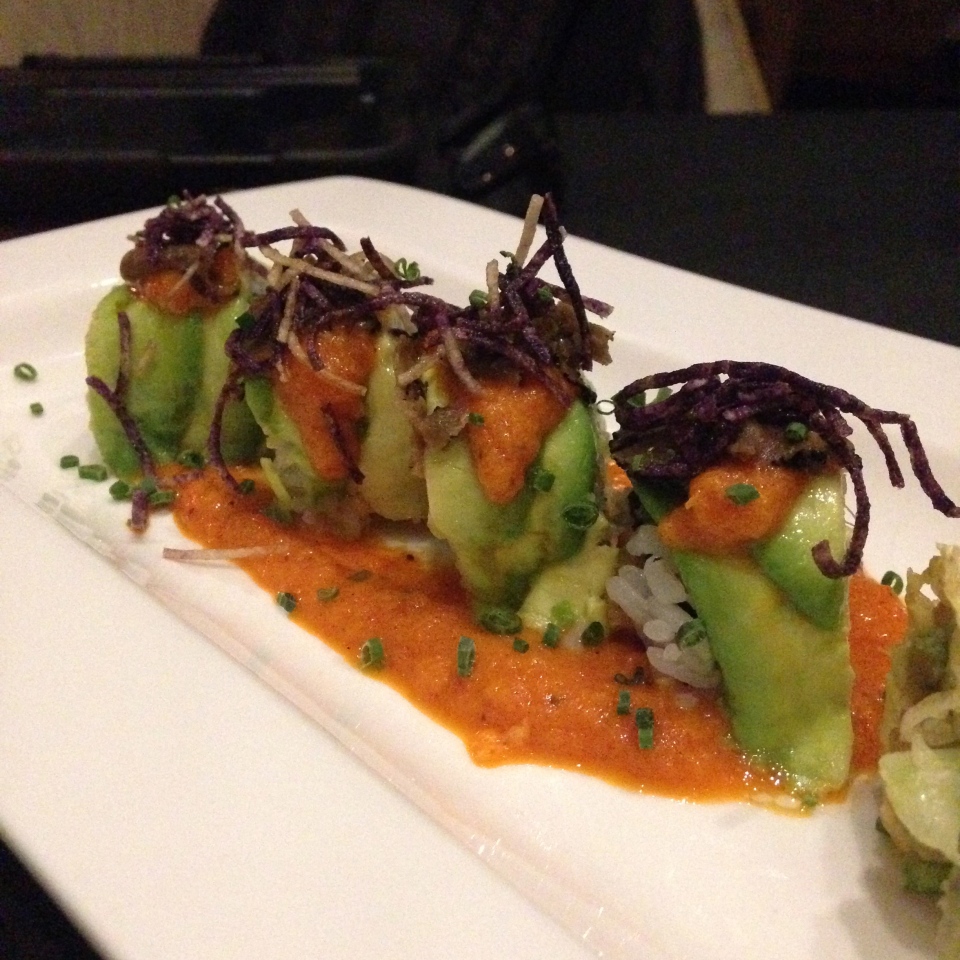 Our favourites of the evening, The Truffle Maki and the Lamb Over Fire Maki. It’s hard to resist truffles when paired with creamy avocado, cucumber and a generous shaving of black truffle; each morsel becomes a moment to cherish. If you love the truffles, this maki roll is a dish you can’t afford to miss.

The Lamb Maki Over Fire. Each bite is nothing short of a mouthwatering amalgamation of flavours. The flames from the coffee beans and lemongrass lightly scorch the edges of the roll, rendering it smoky, with hints of the fragrant burnt lemongrass and coffee. A Ponzu reduction is drizzled over it while it’s still roasting, to add in a new dimension of flavour. Each roll is topped with a tiny slice of chilli and finely sliced scallions. The thinly sliced lamb that wraps around the Maki just seems to melt away as soon as it’s in your mouth. Stuffed with lamb and soy, this roll is a definite must-try from the list of dishes that have been added to the menu at Yuuka. 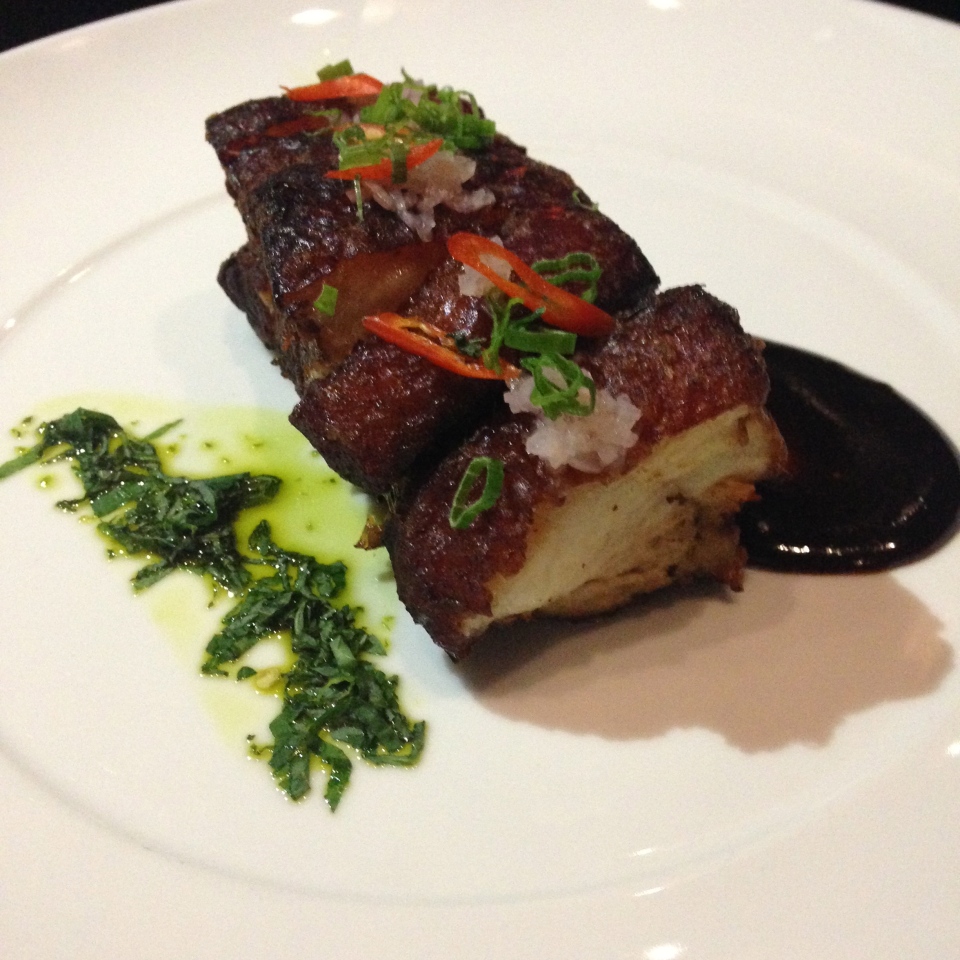 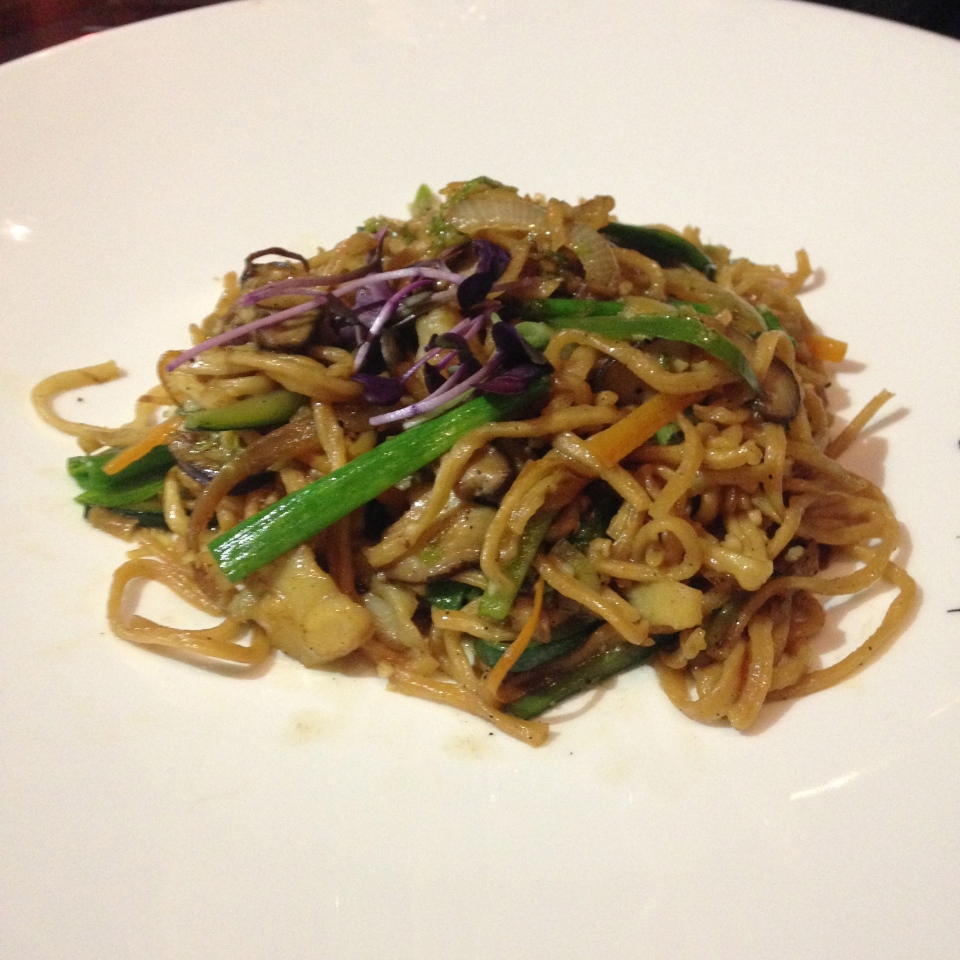 We also tried a few of Chef’s specials like the Chef Ting’s Fried Rice and Stir Fried Udon Noodles with Dutch Porkbelly with Red Miso. We really enjoyed the fried rice as it had a spicy kick to it. Chef informed us that the noodles were not on the menu and were from the hidden menu at Oishii. Only a few patrons at Oishii knew it exists, as he doesn’t like to make it for everyone. It’s made just like how his father used to make it and the Chef took immense pride in sharing the special memory with us. You could tell that the noodles were handmade. They had a really chewy texture to them, I loved the light sauce and vegetables that it was tossed in. The pork belly was tender and was cooked to perfection. 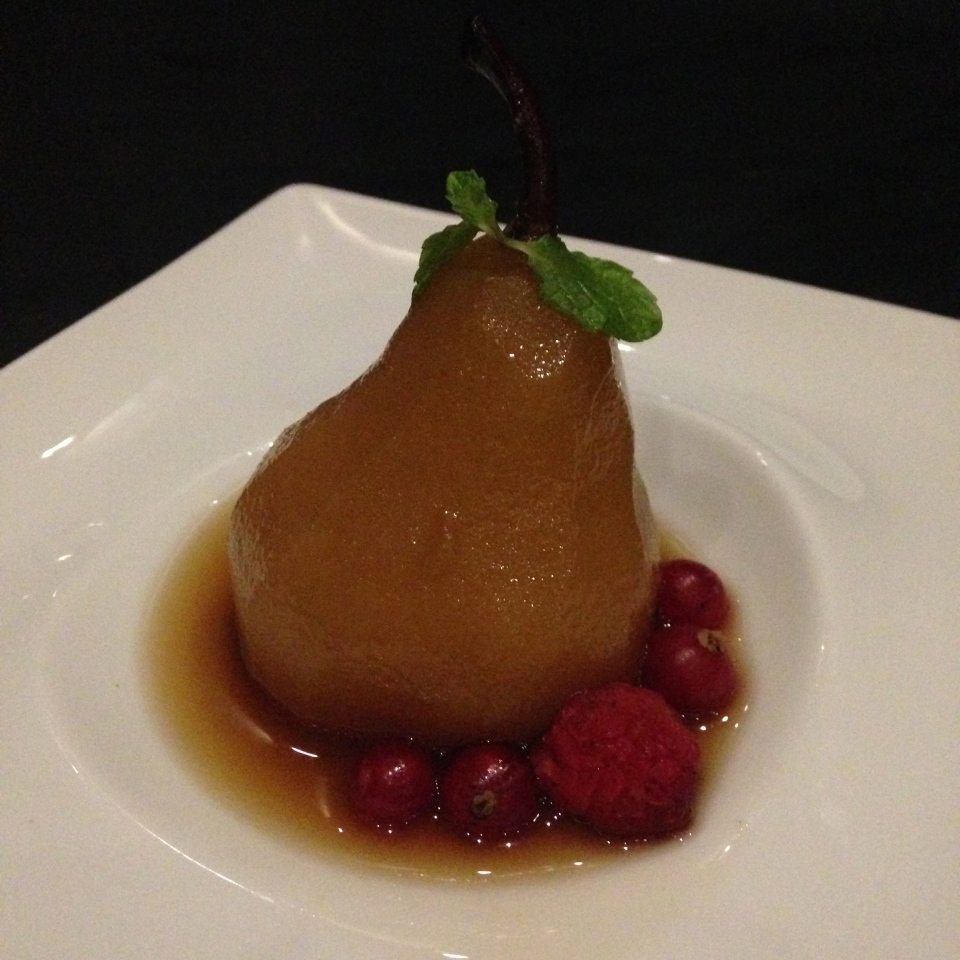 For dessert we had the Wine Poached Pear with Berries. It turned out to be a perfect way to end our meal. Sublime, not-too-sweet and quite literally a nice ‘fade to black’ as far as our evening went.

Yuuka as a restaurant that celebrates modern Japanese food and Chef Ting Yen combines it with Nikkei cuisine with a few Peruvian ingredients. Chef Ting and his son, Kevin, only visit the restaurant at St. Regis, Mumbai twice a year. Kudos to the team of chefs trained by Chef Ting, who keep the torch burning strong and fierce when he is not around. We had the opportunity to meet the father-son duo in November and we had an amazing time dining there.